As most of us were beginners the owners of the alley had kindly put down guides to make sure that all balls would knock down at least one skittle. This did not stop some of our balls bouncing from one side of the track to the other before eventually knocking a few skittles down. The guides also did not stop some of the adults really heavy balls being pulled by really strong gravity onto the wooden track making a big bang and causing the whole building to shake. The owners therefore soon came over to point out that special ramps could be used to help launch the balls and help steering, and also to tell us that we should not throw the balls at the skittles. Although we tried the ramps this was not real bowls so we went back to launching the balls by hand.

Eventually we all got the hang of letting go of the balls at the right time, height and angle to point them in the right direction without killing anyone.

Elle Grieves made an early start by judging her bouncing off the sides to hit the middle pin time and time again getting several strikes and many 10’s. Despite everyone else trying really hard Elle’s lead continued to grow. By the end of the game she had almost twice as many points as anyone else.

A special mention also goes to Louise who spent so much effort throwing her balls that she had to lay down in the lane after every throw. A really good try.

Some of the mums said that they were trying to get as few points as possible to make the rest of us feel good. Tell that to the lad in the next lane with 4 squashed toes.

Of course Elle will have to come again next Christmas to defend her Tiara.(little Crown)

This victory shows that Elle has a strong will to win, and we look forward to the first race of the new season in Toppers between Elle and Hazel.

Hope that you are looking forward to March 2014 when we take to the water again.

Despite most of us getting a little lost either at Corbridge or on the small roads around the club whilst heading for Slaley we got there at 10.00am for an expected 11.00 start.

Despite the forecast of strengthening winds and everybody being ready for an 11.00 start the OOD had delayed the start till 12.55 so that competitors could have lunch before the planned three back to back races, as it was expected there would be no races on the Sunday.

As forecast the wind got stronger, and we were having doubts about letting the kids go out, so we reefed well down, but then luckily the wind abated in time for the first start.

The Bassenthwaite kids wisely stayed a bit away from the 38 boat start letting the Lasers, RS Tera’s and the Optimists go first but then started intent on catching the early starters.

Despite the wind rising again to over 30 MPH, after many capsizes, all finished the first two lap race.

For the second race the wind rose even more and gradually the rescue crews were bringing most of the younger crews ashore, including our Toppers. Only the very experienced Lasers and a few Teras started the third race making the results a true test of skill. By this time we had foaming streaks across the lake and pretty big waves on a lee shore making recovery quite difficult.

A quick well organised pack-up allowed a prompt departure to get back to Bassenthwaite before nightfall to unload boats.

Congratulations to all the kids going on this expedition to another club and facing their strongest winds and competition so far.

A big thank you to all the parents for taking the kids and helping with rigging and de-rigging the boats.

As the 2013 sailing season and our training season comes to a close we find that, building on training in previous years, we have brought 16 youths up to a standard where they can move on to club sailing and participating in regional youth open meetings. The clubs existing race structure includes class starts for the Topper classes and a separate start will be arranged for Thursday evenings in 2014.

The adult classes have resulted in some 7 adults now reaching a standard where they can participate in club racing. This is having a rejuvenating effect on the Laser Fleet so we look forward to some serious class racing next year.

Bassenthwaite Sailing Club is a Royal Yachting Association recognised Training centre. This recognises the fact that this club provides well organised courses following RYA guidance in a very safe environment. We provide taster sessions lasting about an hour for those who have never sailed before, We provide “ Onboard” courses for schools wishing to give their pupils a slightly longer taste of sailing and we provide progressive training for anyone from beginners to advanced sailors. We have been awarded Champion Club status for supporting youths wishing to progress from the RYA training scheme into club racing, attendance at regattas and class racing competitions. People wishing to undertake training are required to become club members and will be encouraged to take part in club racing as their training advances. 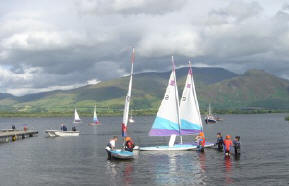 Training takes place mainly in the club’s fleet of 12 Topper dinghies which are suitable for youths and adults. Having a fleet of 12 of these identical boats soon encourages close competition to be first around the practice course. A sailing instructor will normally supervise your training from a rescue boat.

Training for youths from age 9 begins with four levels of basic training to sail, and then there are two levels of racing qualification (Start Racing and Intermediate racing). An advanced racing course can currently only be provided at training centres with very advanced sailing instructors. The first five levels are provided as weekend course with the last course lasting three weekends. Evening practice sessions are provided between each weekend course. A youth starting training at Easter can reasonably expect to complete the Start Racing course in their first year. The more advances sailing courses are better tackled after a few months club racing experience.

Training for adults follows the same pattern except that there are only three levels of basic training. Basic training is again followed by Start Racing and Intermediate Racing courses. Each level of course is provided as a weekend course with practice sessions in an evening.

In 2014 it is proposed to have a Spring series of courses running over weekends and one evening each week, an Autumn series of courses using weekend and evening and a few week-long courses during the school summer holidays.

We provide buoyancy aids and hard hats but we do strongly advise that you buy a well fitting wet suit, waterproof top and neoprene shoes or boots. They will not keep you dry but they will help you keep warm.

Training is provided free to members but because the boats do need ongoing maintenance and occasional replacement there is a £50 boat hire fee for the Spring course from April to July and a £25 boat hire fee for the shorter September/October training period. Week long courses will also have a £25 hire charge.

We recommend that students do not purchase their own sailing dinghy until they have completed at least Adult Level 3 /Youth Level 4 , have tried a variety of different boats and have discussed choice of boats and things to watch out for when buying a second hand boat with an instructor.

For further details of Sailing training please contact Neil Garrison ([email protected]) or come down to the sailing club any weekend between Easter and October. Press the button on the gate access pad to request access.

Bassenthwaite Sailing Club is able to provide a very safe environment for training and racing because it has five rescue boats to cover normal activities. Additional rescue boats are hired in for large regattas.

Members start their powerboat training by training to level 1 and 2 powerboat qualification. After some experience at helping with rescue members can then take a further course to become a qualified safety boat driver.

Although sailing is a very safe sport occasionally someone at the club does get the odd cut, graze, twisted joint or broken bone. Any such accident is best treated initially by someone with a first aid qualification. We have already trained a significant number of members to the RYA standard of first aid, but we encourage all members to take this training as a life skill.