This years Flying 15 Viking Team Racing Trophy was held in mixed conditions. For those that may not sailed in the series before, the weekend comprises four straight races for which teams of three boats add together all their results to determine the winning team. Although there is friendly rivallry throughout the weekend one of the main aims seems to be not making such a drastic mistake that you qualify for the Grotty Potty!

In the first race, Mike Moore and Eric Smith went out on a limb on the first beat, sailing up to (or was it under?) Peel Wyke and were first to the windward. mark. Next beat John Hardisty and Roger Errington (Derwent) also thought it seemed like a good idea, promptly ran out of wind, dropped from 2nd to 16th and became first contenders for the Grotty Potty.

The wind had swung around to the North West for race two, and again the chancers had their moments. William Carruthers and Phil Smith having sailed up the western side of the beat had to deal with a slight header just before the windward mark, duck behind several boats, tack for others, almost collided with a reluctant port tacker (Howard Green and Jonathan Bullen to be precise) who fended William’s boat off with great vigour such that William was then moving backwards!! So from a potential first at the windward mark, William cleared it in about 12th position!

At the next mark, Neil Platt T-boned fellow team mates Ian and Andrea Preston and promptly had to do a 720 in failing winds. Another contender for the Grotty Potty?

After Race three, John Gerrard’s crew made an attempt at becoming a Grotty Potty contender by jumping on to a non existent submerged jetty. Just as well he was wearing a drysuit!

Final race and the winds again caused a stir by throwing one or two holes into the equation and then a lifeline to some of the tailenders. Not that he was a tailender, but this time John Hardisty took advantage of the situation and slotted himself into second position.

The unassailable champion of the weekend was Steve Goacher and Phil Evans who worked his way through to win all four races. Unfortunately, his team mates were unable to show their true colours. Ah well, perhaps another year (if Steve doesn’t pre-arrange his team). 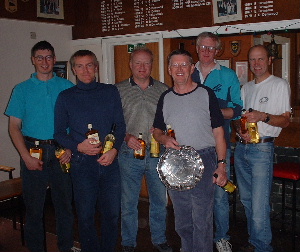 And as for the grotty potty, it went to Ian Preston for causing(?) his team mate Neil Platt to do a 720! 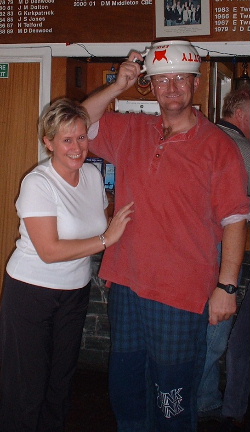