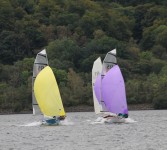 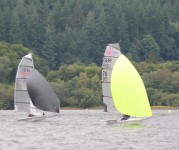 Asymmetric dinghies from all five corners of the north (as in north north, proper White Walker territory without the dragons) and visitors from Scotland, & Cambridge littered the shores of Bassenthwaite Lake, with old and new friends catching up over a brew and breakfast before heading onto the water to challenge for the 10th Great North Asymmetric Challenge, sponsored by Lakes Legendary Ales.

The 10th edition of this popular event attracted 51 entries, made up of 22 RS200s, 19 RS400s, a Vision, a Vareo, an RS100, a D-One, a K6, a 29er, a Laser 2000 and a Nacra catamaran! Other than the 2012 winners, all other GNAC champions had entered with much hype as to which class would be dominant thanks to a breezy southerly forecast. The fleet of 51 was split into two starts with combined results for the overall GNAC trophy and fleet results for the RS200s and RS400 who use the popular event as part of their northern tour.

Saturday was much better than forecast, with a west-southwest breeze offering hiking conditions and a plane here and there for those that could master the breeze funnelling off Sale fell.

Paul and Jude Allen were flying around the course in their Nacra until they had a spectacular tumble! The meaning behind a yelp heard some distance away remained a mystery until the rescue crew arrived on the ‘scene of a horror story’ with a splattering of blood all over the hull due to Paul slicing through his finger as he held on to the shroud… Ouch!!

After three hours of sailing over four quick fire back-to-back races Phil and Naomi Smith led the fleet overall (and the RS200s) counting just 5 points overnight, no easy task in a fleet of 51. In the RS400s, Chris Pickles and Matthew Sharman also from Bass, topped the fleet counting 10 points.

After a hard afternoon on the water the sailors were able to enjoy some freshly cooked fish and chips, followed by a drink or three late into the evening.

Sunday started damp and drizzly, but as some wind filled in, the weather dried up. The OD had made it quite clear the race would start at 10:30am, because he had plans get home to watch the Arsenal Tottenham game.

Unfortunately the wind came from the SW rather than the forecast S, and, like Saturday, it swung frequently to the extent that race 5 was abandoned due to the beat disappearing thanks to a massive southerly shift. The race was quickly restarted, but one general recall was sufficient for the introduction of the U flag, and several sailors were unintentionally caught out by the one minute rule throughout the rest of the day’s racing.

There were some occasional squalls that led to spectacular reaches, gybes, capsizes, near misses, and crowded gate marks, all feeding into some great racing. Some suffered ‘Stella’ sailing, perhaps they stayed in the bar a little too long on Saturday? Others just missed their toestraps.

There was a break for lunch after race 6, following which the forecasted southerly arrived in anger, with champagne conditions offering a hike upwind, and a blast to the gate offwind.

Those watching onshore were guessing the outcome, but with such a varied fleet it was anyone’s guess really. One of the benefits of mixed handicap racing? In the end, Sunday’s breezy conditions suited the RS400s on handicap, which was a shame for overnight leaders Phil and Naomi who sailed consistently on Saturday and needed just one 8th place from the last 3 races to win the overall GNAC. Unfortunately for them, even the mid fleet RS400s were beating the leading RS200s on handicap. RS200 Northern Tour Champions, Ollie Groves and Esther Parkhurst from Beaver had a great Sunday sail and finished first RS200 in the last 3 windy races.

Counting 16 points from 6 races, Chris Pickles and Matthew Sharman from Bass were dominant across the varied wind range, discarding a 6.5 and a 4th to win the 10th Great North Asymmetric Challenge. Hamish Gledhill and Paul Heath (West Riding and LLSC) finished 2nd, sailing their RS400 consistently, discarding two 6th places and finishing on 20 points. Just half a point behind, Dave Exley and Alistair Coates completed the podium in 3rd, counting 20.5 points and winning 3 of the 8 races sailed. First RS200 and 4th overall was Phil and Naomi Smith, with Ollie Groves and Esther Parkhurst 5th overall and 2nd RS200.

Many Bass youngsters entered this year’s GNAC, with new teams finding the conditions challenging whilst demonstrating lots of perseverance, sometimes helped by lots of singing and some laughter on the race course.