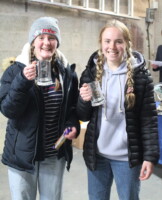 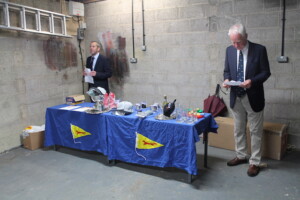 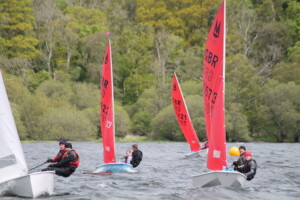 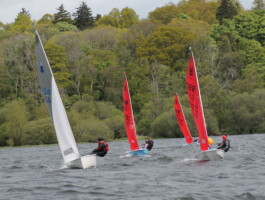 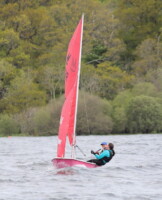 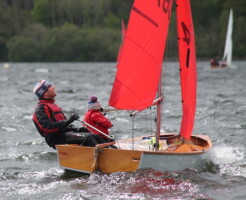 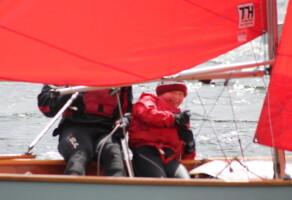 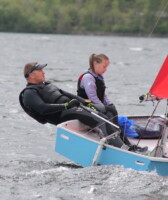 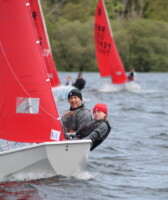 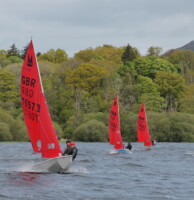 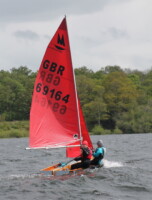 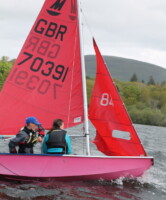 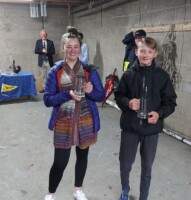 What a restart to Open Meeting sailing after eighteen months of twiddling our thumbs!  A weekend of racing for the two classes with on site camping and caravanning thrown in. It certainly attracted the northern competitors with twelve and seventeen entries respectively in the two classes.  The Lake looked positively crowded!

Although the weather had been wet and wild prior to the weekend, the first of the race days was reasonably sunny and warm.  The only trouble was the wind – or lack of it! Very light airs on Saturday morning eventually gave way to a light westerly to get the two fleets totalling 29 boats on the water after a short postponement. There were some major shifts before the first start, and they continued throughout the afternoon, however the general westerly direction was maintained, and generally most boats had to tack on the designated beats!

A shift at the first start was perhaps the cause of two general recalls for the GPs, but they got cleanly away on the third attempt without the need of a black flag. The wind shifts proved to be advantageous, or challenging, depending on whether or not they worked in your favour. Planing conditions were rare, and there was only one unfortunate capsize by Grace and James in a Mirror, seconds after they finished the second race.

Phil and Naomi Smith, sailing separately with children Oliver and Lucy respectively, had there fair share of good fortune throughout the afternoon. In the first race, Graham and Sebastian Vials were leading but failed to head for mark A on the run down to the leeward mark. Phil was lying about 4th, noticed the error, took the lead, and won, with Rob and Elizabeth Cook 2nd. By the time Graham had noticed his mistake, he had to beat back to A, dropping back to finish 8th overall.

In the second race, Naomi and Lucy opted for the left hand side of the first beat, taking advantage of a major port lift, to be clear ahead at the windward mark, a lead which they held to the end, holding off Rob who had another 2nd to be overnight leader in the Mirrors. With so many youngsters in the Mirror fleet, it is not surprising that one fell asleep (well Saskia isn’t two yet!)

In the GPs, Bass’ Dave Lawson and Joe Roberts had good leads in both races, winning the first, but were passed on the final run as the wind filled in on starboard gybe. To top it off, at the leeward mark the two leading GPs went wide round a Mirror, but Adam McGovern took advantage of the situation, rounding inside the Mirror, and gaining the lead to win the race, and lead the series having secured a 2nd in the first race.

Sunday started with a stronger southerly, so a course was set to send the GPs to mark 7 at Scarness, but by the time the fleets were all on the way to the start area, the wind veered to the SW. The start line was relocated, a new course set, and the wind rapidly strengthened as it backed to the south. So a third  course was set, and racing was soon underway. The increase in wind put off several competitors who headed back to shore.

In the GPs, John and Jack Telford were leading, and in close competition with Dave and Joe, until an unfortunate capsize at a gybe mark. Dave went on to win, with Adam 2nd. In the next race those positions were reversed, so it meant the championship would be determined on the final race. More close racing between the four boats that sailed, had Adam take the lead which he and Eleanor held through to the finish, winning the GP Northern Championship, with David and Joe 2nd, and Patrick Hamilton and James Dewhurst 3rd overall.

The Mirrors had close competition between Andy/Lily Smith and Rob/Elizabeth Cook, each sharing the lead positions in races 3 and 5. In race 4, Rob was OCS and subsequently retired, but this time Andy was runner up to Graham/Sebastian Vials. It was Andy’s win in the final race that won him and Lily the open meeting trophy, with Rob/Elizabeth 2nd, and Jonathan Bullen/Gracie 3rd overall.