Although the GP Inlands are being held at Northampton, and F15 Northerns at Windermere, there is a full racing programme arranged for the Bank Holiday. The forecast, was fairly dry, with mixed winds. Saturday certainly met with mixed winds – the first race was held in light airs that faded for a while splitting the fleet, though it steadied for the second race. Commodore Stephen Kirkpatrick has given up on crews and joined the single handed fleet having bought a Vareo.

The Catapult Association again joined us for an open meeting, but they were likely to be waiting a couple of days for decent winds. Gareth Ede again mastered the conditions and took the overnight lead with two firsts.

Sunday’s forecast was always likely to be challenging (about the only time the forecast is correct!), and getting the scheduled three races in would be an optimistic outcome. The morning started off with sunny clear skies, but windless. By the time racing was due to start, a shower had moved in, but brought some wind with it. The wind was initially from the NW, and it’s a shame that when the weather dried up the wind faded again; even more so that the racing was already underway! The fleets did not even complete a whole lap, and they had to cope with the light swinging airs coming from the East, South and North. There were a few that took the opportunity to hone their pumping and ooching skills on various shifts that they claimed to have spotted.

Lunchtime was rather extended, as the wind failed to materialise, or settle down when it did appear. However, when a breeze appeared well after 3pm from the not to be trusted forecast direction, there were still many willing to break themselves away from the football and go on to the water. Racing started, and as in the morning, the wind eased just after the Catapults started, but it was not quite as dire as the morning, and the race was shortened after 1.5 laps bring the day’s racing to an end.

Despite the challenging conditions, and many positions changing throughout the race, there was still a general consistency in the overall results. Also, there was a bit of fleet and boat swapping throughout the day. Robbie D teamed up with Big E again in a F15 to give Ian/Lezli-Ann a race, and in the afternoon Graham/Alan (having declogged their control lines) and Keith also ventured out as well. Ethan was eager to try out his dad’s Vareo and was able to give Banter Phil a run for his money in the afternoon, while Steve/Ruth borrowed Paul Clark’s Graduate in the afternoon and won the race, if only by a few secs.

With the promise of better winds for Monday, the Catapults had an early start to squeeze in the missed race from Sunday. Gareth Ede yet again mastered the choppy conditions and cemented his lead in the series.

Club racing started just after the second and final Catapult race was under way, and the Commodore seemed a little surprised that the fleet set off without him! There were several capsizes, and a smothering of lake mud on some sails, but the thrills of the day seemed to outweigh the spills. As the race went on the wind strengthened a little, making it harder work, though still raceable, but it seemed to zap the enthusiasm out of the sailors because, with the series tied positions tied up, there were very few potential takers for the afternoon race. 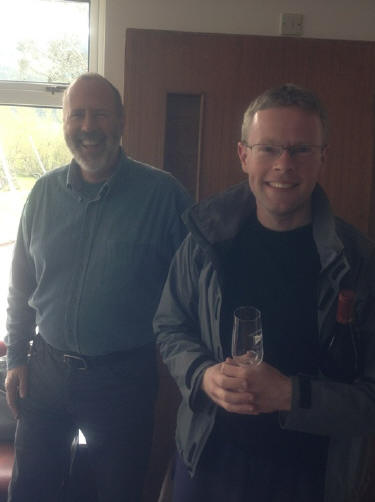