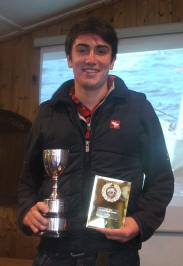 Bolton S C hosted the final event of the North West Junior Travellers 10 race series on Saturday. The challenging wind conditions resulted in several capsizes which kept the rescue crews very busy. This was Sam’s first season as a youth and the competition was closely contested throughout. It was down to the final event to decide the winner. Sam finished first overall and was awarded the NWJT trophy and several other prizes from the series sponsor 1st. Mark.