The junior were having more fun on the water with relay races, and Pirate netball (not sure what that entails, other than it was described as carnage by one mum!).

The following photos from team Brotherton demonstrate what sailing is all about with fun on the water. Will there be any Olympic hopefuls amongst them? 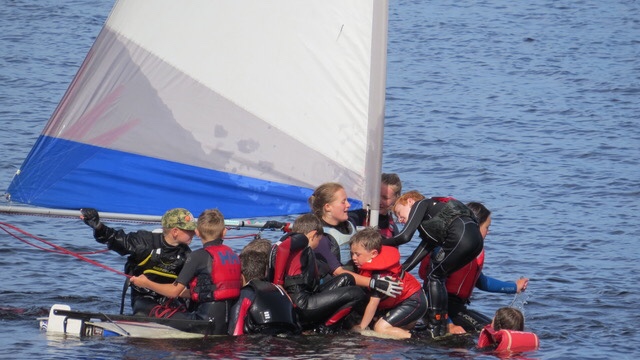 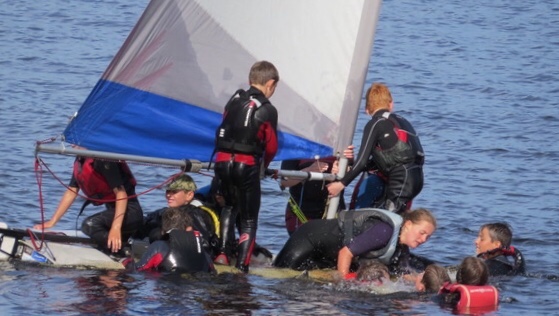 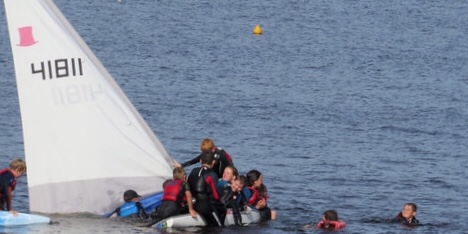 Racing for the weekend started with two races in the Dawson Trophy long Series. The good weather had tempted Graham and Alan on to the water in a F15, and they held a commanding lead only to round the final mark of their first lap the wrong way (was it really by accident that they were told it should be rounded to starboard?). Unfortunately they did not unwind their mistake, they made it worse by rounding it the wrong way again, and consequently opted to retire just before finishing the race in the lead. To prove it wasn’t a fluke, they led the next race as well, and won it. 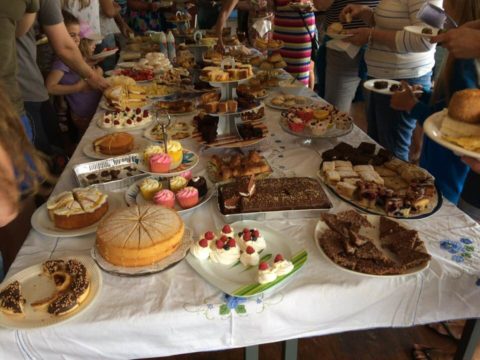 The wind held throughout the afternoon for the 30+ boats, across the four fleets, racing which was followed by an afternoon tea with a vast selection of cakes.

Sunday’s racing started in similar conditions to Saturday with a good southerly that tempted the OD to send the fleets down the lake to mark 15, with a windward/leeward course which proved to have one of the steadiest winds for a long time. Emily kept shouting she couldn’t sail to 15, but she proved herself wrong by so doing!

During the next race after lunch, the wind faded rapidly which made sailors uncomfortably hot in the heat of the day with no comforting breeze. The wind did seem to be returning, and a new course was set for the final race of the day but, with seconds to go before the sequence began, the sea breeze came in with gusto, so the line and course was reset, hopefully allowing the misery of the second race to be quickly forgotten. 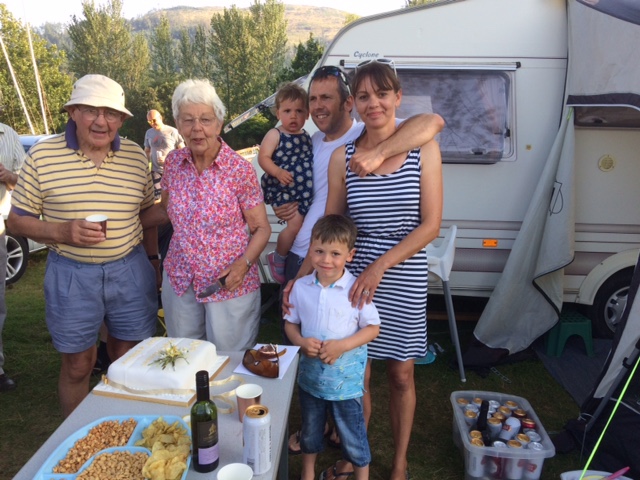 After racing the Commodore had a drinks party to thank everyone that had helped make Bass Week a great success, and it coincided with her parents’, David and Barbara Darling, 50th wedding anniversary. Congratulations to all!

Monday morning was foggy and grey with little sign of the forecast F1 from SW. As the start time approached, the AP was raised, but there was a hint of some wind filling in so the OD went on the water to investigate. Soon after the decision was made that racing was good to go and the fleets soon joined the OD on the water. As ever, the wind was shifty, but it did ease and prolonged the final lap for the later finishers.

After lunch there was some apathy towards venturing out again, but the OD went out, set a line only for the wind to shift, then disappear, but, with 20+ boats milling around, the OD just waited to see if anything would fill in. The sea breeze did its bit, and racing was soon underway, though when the F15s started there was no wind at the 2nd mark A. Fortunately as the lead boat edged towards A, the wind followed them, then strengthened, and held through to the finish, complete with mega shifts to contend with.