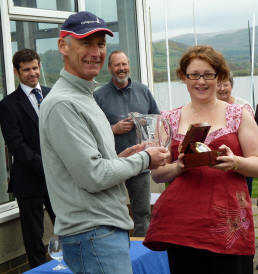 The cold frosty night meant we started the day in glorious sunshine. The forecast northerly was much more reluctant to settle down and kept swinging between north and west. The wind strength consequently varied considerably and came through in waves, but generally the conditions were light and testing. By the end of the first beat, boats from all starts were merging on the windward mark!

Paul Ellis, seen here receiving his prize from Claire Kirkpatrick, continued his mastery of the conditions to finish 2nd behind Cliff Awtill, but won the championship overall with a clear lead 8pts ahead of George Evans.

Club racing was testing, and there were various ups and downs depending on who was in the right place as the wind filled in for a few minutes. William and Lesley made an amazing recovery after a dreadful first beat to be challenging the leading RS400s. Scumper with Zefer, and Robbie D with Big E had some good racing but seemed to gyrate around William as the wind came and went.

An unexpected capsize by Tim Knowles on his way ashore seemed to raise a loud cheer from the many people that noticed it, though it did then put him in a situation that caused Mik Chappell to capsize as well!

In the final race, as various series winners had been determined, there was some apathy and a lot less takers. However, William joined forces with Alan Smith in a F15 after many years, and joined in with the racing. Although the other two boats waited for him at the start line, that was where the courtesy stopped, and they soon disappeared only to be passed by William when the wind filled in from the clubhouse. Alas, that state of play was not to last, and Mike went on to win the race and make it a clean sweep. Calamity Campbell was at it again, trying to take out the Vice Commodore at one of the gybe marks. He admitted it was the first set of turns he had done in years – he just didn’t admit how many more sets he perhaps should have done!

Weekend winners – Phil Smith in the handicap fleet, Mike Moore in F15, Paul Bowmer in the GPs, and Alan Waugh in the Mirrors.

The morning has started bright and dry, and the winds are forecast to pick up to 12mph, so hopefully there will be good sailing winds again. Fortunately the winds did fill in, and for those that got into the wind streams they were able to enjoy some thrilling racing.

Overnight leader Paul Ellis took the first race of the day, and together with George Evans, they are getting a good margin clear of the rest of the fleet. Paul continued his winning ways with another two 1sts, securing the championship. But Gareth Ede has been able to discard his DNF and is currently lying 2nd. One final race tomorrow to finalise the overall positions.

In club racing, Mr and Mrs Bean in their RS200 were a constant challenge for the RS400s, and secured two convincing wins on handicap, and a 2nd to sit in overnight lead for the May Holiday Trophy.

Only one race was sailed in the Mirror fleet, and it was won by John Telford sailing with son Jack, from Mik Chappell.

Robin Crawley leads the Topper fleet series with two 1sts and a 2nd, over Olivia Storey.

To keep the sailors’ minds active, there will be an evening of board games

The weather is dry, the wind is light and the catapults are all blown up and raring to go! The wind is due to come in from the north so hopefully racing will get underway as planned, even if cooler than it should be for May day!

The wind did fill in from the North East, and brought with it some good planing conditions at times as well as some rain 🙁

Eleven Catapults took to the water, and Gareth Ede led the way in the first race but had to retire from the second race. Stuart Ede did not have much more luck – breaking his boom in the first race, managing to secure third, but unable to sail the second race. So it was some consistent sailing from Paul Ellis, with two 2nds, who is overnight leader.

In club racing there were a couple of spills – Mik Chappell capsized tacking away from William and Lesley in an RS400. Toggle found some of the tight reaches challenging (and I think he capsized, but not certain!). It was Robbie D and Big E that led the fleet to win on handicap. In the second race, the wind eased as Robin sailed the final lap, increasing his average lap time, and resulting in Toggle winning the race (perhaps he’ll be buying OD Scumper an extra pint tonight?)

Ian Campbell made a return to the water, sailing with Keith Thomas in his F15 – amazing how Ian’s kept hold of that old sailing suit from possibly 15 years ago! Anyway, it didn’t bring him enough luck to beat Mike Moore and Kayla – perhaps time to buy a new one?!

The Spring dinner was held in the club house and enjoyed by 70 members and visiting sailors. It was topped off with a quiz (won by the visitors!), and a ditty writing competition starting ‘There once was a sailor …’ Ian Preston’s winning ditty was inspired by Mik’s fire raising antics (only to be repeated by the Trustees table!)