High wind and rain resulted in the cadet training being cancelled on Saturday. However, it didn’t put off Scumper and  Zefer  from blowing the cobwebs off their RS400 and getting it ready for a sail, ever confident that the forecast of easing winds would come to fruition.

The wind slowly abated, and the rain stopped (always makes sailing more inviting!), and four boats opted to race in the Celebrity Glass Pursuit. It was to be Matty in his RS Tera that would start first, while dad Scumper & Zefer in their RS400 would be last to start some 16 mins later. Matty sailed well, stayed upright, but was passed in both races by eventual race winner Scumper. Andy T in his Laser picked a challenging day for his first race of the season, and got to practice his capsize technique a few times, as did Poppy in her Topper.

Sailing was hard work, but there were some exciting reaches to be enjoyed. Scumper won overall with Matty 2nd.

Sunday brought a fresh southerly, that veered and backed around Sale Fell all day, the downside being that the shadow caused by the fell affected various legs of the course. When the wind was fully in play, there were some great planing reaches to be enjoyed.

In the first race, John/Jack beat AJ/Sue in the GPs, Robbie D beat Dave L in the handicap, and Andy/Lily beat Katia in the slow handicap.

Between races Banter/Izzy went ashore to replace a spinnaker halyard, but, with the wind freshening again, the OD couldn’t hold the start of the pennant race long enough for them to return (which they did, some minutes into the race). Seconds before the start a squall resulted in Dave L in his Laser, and AJ/Sue both capsizing. Though the wind then suddenly eased, shifts and gusts continued throughout the race resulting in more capsizes (Ethan seemed prone to capsizing just as he passed the Bates!), and several retirements. 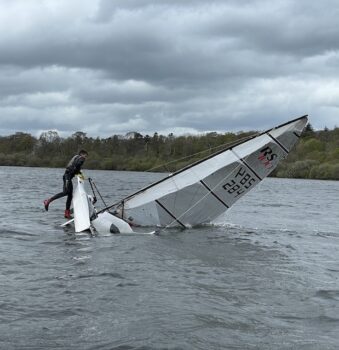 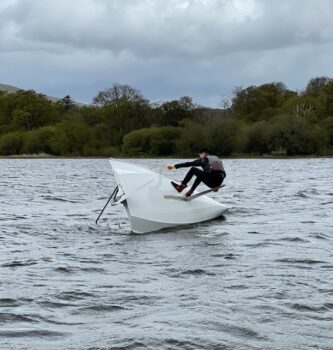 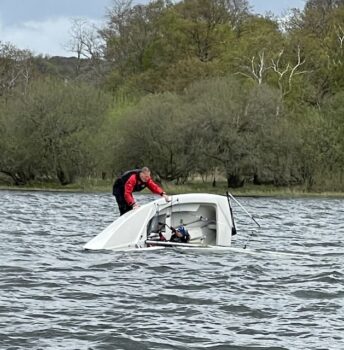 On handicap it was Robbie D in a Solo that won, with John/Jack in their GP 2nd, and Andy/Lily in their Mirror 3rd