Blue skies with a cool gusting NE wind seemed to be a bit challenging at first but 16 boats raced in the weekend’s Celebrity Glass Trophy series. Not surprisingly, the wind was swinging throughout the afternoon, and it did ease at times throughout the first race, but bedded in for the second race. 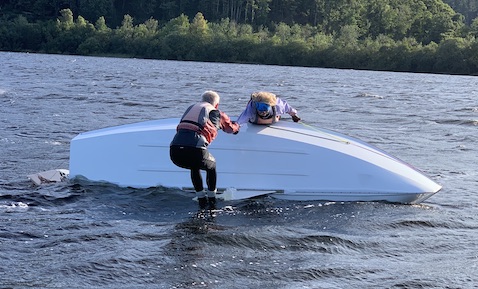 There was some good reaching conditions at times, and the occasional capsize, including Tog/Joanie in a RS200, Barbara in a Laser Radial, and Dave/Lynn in their GP after they finished! However, generally there was some close, and consistent, racing. Steve/Ruth led both races, but they could not break away from Dave/Lynn sufficiently in either race to beat them on handicap.

Poppy persevered in her Topper, avoided capsizing, and completed both races!

The final results had the GPs taking the first three positions – Dave/Lynn, John/Jack then Val/Ken.

Sunday’s start may have been put back to 1130 but the Lake was just as flat then as at 1100. It remained that way until Andy abandoned at c1230.