For various reasons there has been a disappointing turnout for this year’s team racing. With three boats from Derwent that expected to race as a team, they were split up and teamed randomly with one of the other competitors.

On Saturday, Robin Dawson sailed with Ian Preston and led the way for a while, but Tony Lee got into his stride and won both races. The winds were light to medium from the SSW so the OD tried to set courses avoiding the inevitable shadow in the lee of Sale Fell.

The Flying 15s had one extra player on Sunday – Neil Platt. The winds were again from the South West and swinging around Sale Fell but slightly fresher than Saturday.

The racing was again close, but in the end it was the B team comprising Tony Lee and Robin Dawson that sailed consistently to win the Viking Trophy (if only we knew where it is!). Not surprisingly Derwent featured in the prizes – one of the benefits of having a Derwent boat in each team!! Tony Lee gave a vote of thanks to the club for hosting the event. 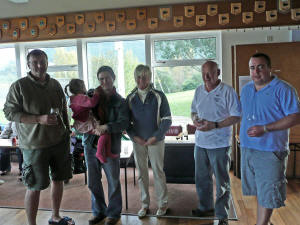 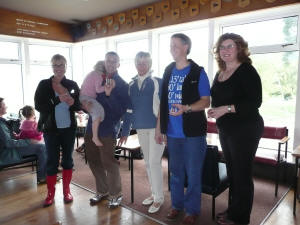 The October series, sailed on a personal handicap basis, started on Saturday with a fleet of 10 boats. No real excitement to report, but the ever changing handicaps make it difficult to predict the results (other than someone will have a whinge)!

On Sunday. Neil Garrison managed to secure a strong lead in the first race, and so sailed 4 laps to the rest of the fleets 3. Martin Wright won on handicap.

Nigel Lewis was keen to get the second race underway, but somehow managed to be 3 minutes late, and narrowly missed ramming the Bates on mid transom. His racing ended shortly afterwards following a capsize drill (or so he may have us believe). Joan Hardie sailed a good race and stayed in the lead, but the personal handicapping system dropped her back a place behind Val Bell.

Joe Watkins had a good weekends sailing and is presently 2nd overall behind John Halliday who seemed somewhat confused most of the weekend due to the variable approach to the starting sequence which had been implemented to accommodate the F15s.