Saturday started off with some sail training for the juniors before racing got underway for the Paul Carruthers Memorial Trophy, a handicap series for all fleets, and the start of the three day Catapult Open for which there are eight entrants. The northerly wind was bitterly cold, and a lot lighter than forecast, with a hint of rain.

In the first race the the wind eased as the fleets started the second lap, so the OD raced up the course to stop the race, but it was another half hour before all boats finished. Scumper/Zefer in their replacement RS400 were first to finish, and won on Handicap with Commodore Naomi in a Mirror taking 2nd place, cheered on by son Oliver in the Committee boat.

The wind filled in again and held for the next race. Scumper led the fleet again, but with Steve/Ruth in a Merlin on his tail, they were close enough to win on handicap, with Dave/Lynn in a GP 2nd. Though Scumper and Dave both had 5 points, the tie was broken in Scumper’s favour as he had won the first race.

Racing was postponed for a short while on Sunday morning due to several calm patches across the lake. The wind filled in enough to start proceedings by 12.30. The wind continually varied in strength, and swung, throughout the day. There were opportunities to plane on some reaches occasionally, but they were the exception, and had to be enjoyed/taken advantage whenever possible. 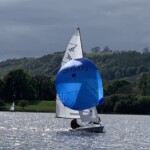 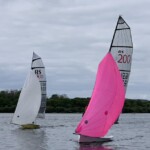 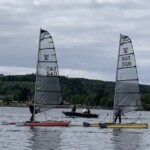 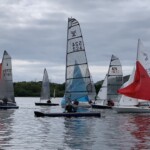 The varied conditions did mix some positions up, as did five handicap boats being OCS in the 2nd race, of which only three returned. A challenging days racing, with the final two races tomorrow, resulted in the following overnight leaders – Simon/Jon in the F15s, Dave/Lynn in GPs, Robin/Erin in Handicap, Andy in Slow Handicap

The evening’s entertainment started with a pie and pea supper followed by a race night.

Monday’s forecast was not at all encouraging in terms of there being sufficient wind to sail, a light wind across the lake was enough to get the fleets on the water and racing underway. The Catapult fleet were first on the water, and rather than make them wait for club boats, a course was set and their race started. By the time club racing started the wind had swung as it strengthened a little, but didn’t swing back until the final lap, so they had to put up with fetches instead of beats for a while.

Despite having to return for being over the line at the Slow Handicap start, Bean/Oliver quickly caught up lost ground to take the lead and win the race from brother Andy/Lily.

During the lunch break there was a prize giving for the Catapult Open which was won by Gareth Ede, with John Terry 2nd. Gareth’s father Stuart won on personal handicap basis.

The final club race was a bit of a formality in that winners of each fleet had already been determined after four races. However, it didn’t stop the Smith brotherly rivalry in the Slow Handicap fleet, as they endured some close racing, including trying to luff each other way off course. Andy took the lead at the final mark to reinforce his lead in the series.

In the GPs, AJ tried his hardest to squeeze Mike/Eric the wrong side of the Bates at the start, only to sail himself between the Bates and the inner distance mark, snagging on and snapping its mooring warp! Needless to say, by the time he had corrected his error, Mike was well up the beat!

Tog had a flying start in the Handicap fleet as he tacked onto port and sail up the right hand side of the course only for the wind to strengthen on the left hand side, favouring the rest of the fleet! Emma’s tiller extension broke away with half a lap to go, but she persevered to finish.

The final winners were as overnight, Simon/Jon won the F15 Jak Pot, Dave/Lynn the GP Lyne Tankard, Robin/Erin the May Holiday Trophy, and Andy/Lily the Peel Pot.