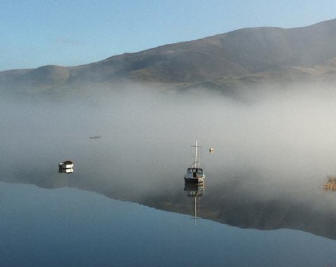 The November series failed to get off the ground this week. Clear skies all around;  a lack of wind to drive the turbines on Bothel;  wind on the coast; but in the micro climate that is Dubwath, there was low lying fog that was very slow to burn off. Though it did lift by Noon, and ripples filled a good proportion of the bay, it never seemed likely that it would fill in sufficiently to warrant a race, so after lunch the OD called racing off for the day. At least it created an opportunity to have a bit of a clear up after the bonfire night celebrations!Hope you’ve ordered your tickets for the dinner – especially if you’ve won a prize!