After some localised morning showers, there was another sunny Saturday for sailors, with F4/5 south westerly, for the start of the weekend series. Throughout the afternoon the wind freshened and eased, veered and backed, making for some testing conditions resulting in various capsizes, broaches, and changes of position.

In the F15s, Simon/Jon led the first race throughout, with Neil/Rory 2nd, though this was reversed in the next race, giving Ndeil the advantage overnight.

Mark led the handicap fleet in both races but not being able to make best use of his gennaker finished 5th and 4th on handicap. It was Joe in his Laser, John and Robbie D in their Solos, that were competing for the lead, all finishing within half a minute on handicap. John was consistent with two 2nds, while the other two each had a 1st and a 3rd. Joe is overnight leader. 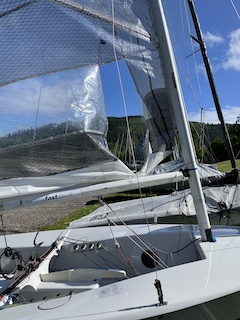 Tog’s sail ripped in the 1st race, so he retired to tape it up, only for the rip to get worse when he fell through it during a capsize in the next race!

In the GPs, Val/Ken had 1st and 2nd, AJ/Sue had 1st and DNF, with James/Jenny 2nd and 3rd, putting Val as overnight leader.

Emma in a Mirror has a 1st and a 2nd to lead the slow handicap, with Alex/Saskia in a Mirror 2nd and James in a Tera 3rd.

Sunday brought in more wind, and lots of drizzly wet rain! Val and Ken turned up to defend their overnight lead, but there was no competition, and the rain didn’t tempt them to race in the handicap fleet, so an early exit back home as winners of the Graham Cup.

With a forecast for increasing winds, Neil was keen to get two races in before lunch with an aim to win the series and get home for the football! His plans were initially scuppered in the first race when Birthday boy Angus and Mike took a strong lead which neither Simon nor Neil could overcome. Angus took the lead in the next race as well, but Simon gybed into the lake to take advantage of the stronger gusts, and broke through to the lead. Neil did close the gap but missed a tack by Simon, and was caught out on port, and unable to clear Simon’s transom. Not his day, and Simon/Jon won the Scarness Cup.

Scumper led the handicap fleet, but capsizes, and heading for the wrong mark, didn’t help his cause, though he did take a 1st and a 2nd finishing 3rd overall. It was Joe and Robbie D that would be battling it out for the trophy, each netting 7 points. If the results had been available over lunch Robbie D have opted to race rather than watch the footie? As he didn’t, the tie on points was split in Joe’s favour to win him the Wythop Trophy.

With no racing in the slow handicap fleet, Emma wins the Reflection Trophy