The first day of September started somewhat drizzly, especially for those on the training course being run by Nigel Lewis. Not sure what has happened this week, but many seem to have opted for go faster haircuts (Ginge, Jonathan, Shunty, William) – when you see the results it’s clear they don’t work! As for attire someone was out of step – William sailed in polo shirt and shorts while everyone else was in steamers/drysuits, and even woolly hats!

It was not as windy as the forecast had predicted (unusual for the beginners as it usually blows!). The wind did come through in waves and it depended where you were as to the benefit, or otherwise, obtained. William and Jonathan had managed to break away with one of the gusts in the first race, but 1½ laps later the wind conspired against them to close the substantial lead that they’d secured, and Shunty, with Ruth, broke through to the the lead. Then when the gennaker jammed it was Neil’s turn to take another place! In the second race, there was place changes due to mishaps. Andy and Emma hit a mark (as did Scumper and Toggle) which slowed them down for a while; Shunty tried gybing off but went backwards; also, he had problems when the kite halyard jammed causing him to lose a place. Mark Rimmer should have been on capsize drill the number of times he tipped it in. An incident in the first race led to a protest between Scumper and Shunty, but the protest committee couldn’t determine what had happened so the results stood. Mustn’t forget to mention Roy, with Kirstie, who’s back in his capsizing way. Elaine had a practice comeback to sailing in a brief session(?) with William to help blow away a few cobwebs (well apart from the one that seemed to be lingering afterwards in the bar) – depending on Sunday’s weather she may be back for more! As for Shunty’s comment, Jane said we’d only find out when he does something naughty!? Apparently Bridget didn’t sail because she was under the doctor… On handicap, it was Andy and Emma that secured wins in each race

In the GPs Dave and Lynn Lawson sailed consistently with two wins from Hugh and Rhonwen, as did Toddy who took both races from Mik 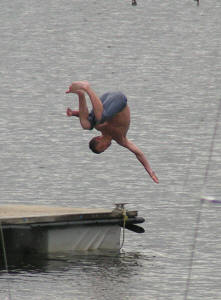 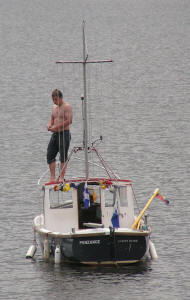