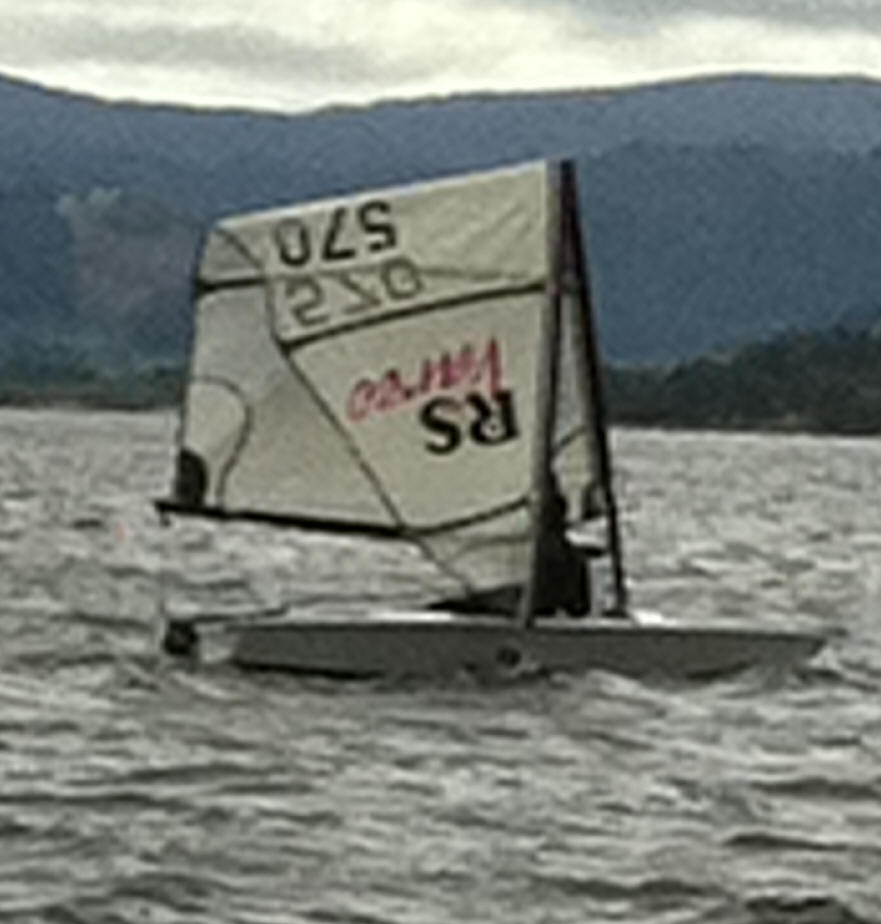 There was a forecast for good winds with 28-41mph gusts (depending on which forecast you read)! Fortunately, neither was totally accurate – although the winds were strong generally, the gusts did not seem not tooooo vicious, but there were numerous capsizes during each race and an unexpected amount of damage.Steve Hunt was the first to bow out due to damage when he broke his tiller extension during a capsize. The next casualty was Banter Phil when his mast broke at the foot following one of his capsizes. The final one can be seen in the adjacent photo when Scumper’s new mast broke with just a couple of legs to go. Like a trooper, he continued to the finish and still finished 2nd on handicap, as Toggle passed him on the final leg and beat Scumper by just a few secs. Peter Ballard finished 3rd.

Neil Platt/Ian Smith led the F15s with Mike/Kayla 2nd and Simon Longstaff/Jon Denwood 3rd. Keith Thomas/Emma Williams had some problems trying to unwrap their spinnaker sheets off the end of the boom, and ended up colliding with the rescue boat that was recovering Alan Waugh’s Mirror after his capsize.

Dave/Lynn Lawson led Val/Ken Bell around the course and secured yet another win, with Nigel Lewis 3rd.

The Mirrors thinned out as the race went on – First Mik opted out, and then Alan Waugh retired following his capsize. Andy Smith won ahead of John Telford, though Andy retired after finishing.

The wind seemed to ease over the lunch break and then came back with a vengeance!

Many more capsizes again kept the rescue crews busy, though there was no gear failures. Many were cautious about flying spinnakers, and even more so at the gybe mark because they tacked round. Alastair Duncan retired after too much swimming, and drinking lake water (his words!). Mark went out with Kirstie in a borrowed RS200, and despite a capsize she said she’d probably do it again. Steve/Ruth  led the handicap fleet and won with a strong lead ahead of Scumper, with Toggle 3rd who is overnight leader.

In the F15s, Neil Platt led again, but Simon had to work his way up to 2nd, with Mike 3rd.

GPs were down to boats with Dave/Lynn beating Val/Ken. Similarly there were just two boats in the Mirrors – Andy 1st, with John 2nd.

From a Musto Skiff on Saturday, Robbie D took out Ethan’s Topper and raced against Tim Smith, who later retired.

The wind should ease somewhat for Monday, but forecasts have been known to be wrong.