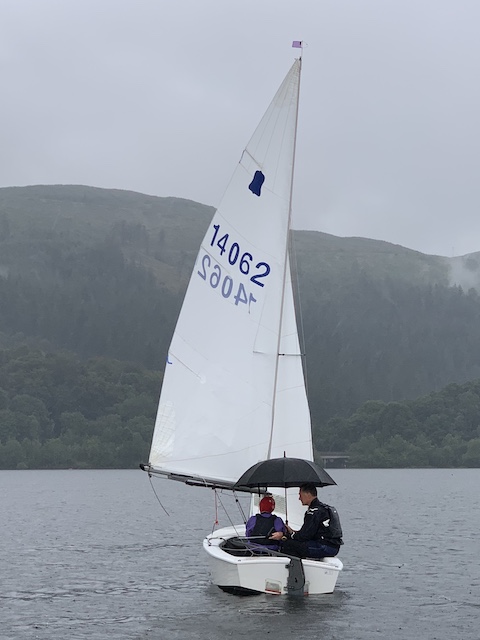 Persistent drizzle/light showers seemed to flatten the lake and give the impression of fickle winds, but once on the water there was enough wind to keep the boats moving, and after the first lap, it freshened resulting in a few capsizes, and a few near misses.

Paul Gannon moved in to a Laser in the lighter airs, and sailed well to take the lead, lost quote a bit of the lead after hitting the penultimate mark, finishing 3rd behind Rory and Neil in their Solos.

Toggle was getting ‘excited’ while explaining to Joanie what had to be done in some of the gybes as gusts kicked in. Despite Tog/Joanie leading in the Pink RS200 most of the second race, on handicap the finished 4th, with the honours going to Ant in a Vision, and Rory in a Solo 2nd. Neil Currie finished 3rd and won his second series of the weekend, the Skiddaw Trophy

With Val OD, Mike Fairlamb took the opportunity to nab Ken as a crew and sail his GP for the first time this season, winning both races from AJ/Sue. Perhaps their umbrella was too much of a hindrance? However, AJ’s results were sufficient to win the GP Autumn Cup.

Bean/Oliver in their Mirror won the first slow handicap race ahead of Katia in a Topper, but both boats retired in the next race. The MT Bates series was won by Bean.