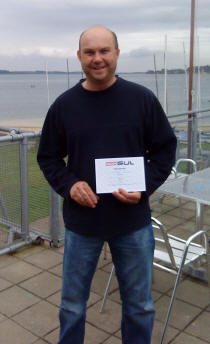 The forecast wasn’t for much wind and it was right – the lake looked glorious. Shame it was mirror like. Perhaps the slight breeze at the southern end would work its way into the northern bay. Then again…..The wind came, and went, and came back in again from about the forecast westerly direction and racing got underway about 1pm after some glorious sunshine. As the race went on the wind strengthened slightly such that the afternoon was strong enough to sit out and plane at times. There was even the odd capsize – Robbie D capsized when he got his life jacket caught on the boom!

Scumper’s two firsts from Saturday, plus a third for being OD kept him at the top of the handicap series from William and Cristina

All in all a pleasant weekend’s sailing

Two boats went to the RS Inlands at Rutland – Andy and Emma Smith’s best result was 5th coming 24th overall, Phil and Naomi had a 9th and finished 51st overall in a fleet of 78