What a beautiful morning – very few clouds, with a patchy breeze sufficient for the Tinker fleet to enjoy an early 1030 start

By the time club racing started the wind had filled in from the SE, and the course allowed some good planing on starboard tack, but not always on port! Robbie D and Andy Smith were both sailing lasers and trying to persuade the OD to have a course that preferably had no beats! Ruth Critchley ventured out with Mike for her first sail/race in an FF.

The wind held for the afternoon racing and the beats were even longer – from 2 – 7! (Just for Robin and Andy?). There were again some good reaches, a bit challenging at times, especially for Judith Currie, but she survived them! The final race was to be the decider for the trophy between Mike Moore and Val Bell, but it was her consistent sailing, and finishing second to Neil, that secured the Tinker Trophy for her and Ken

The Tinkers had an enjoyable rally, although their fleet was slightly depleted this year with just 12 boats, but the weather and conditions were probably the best they’d enjoyed at Bass for several years. David Warren secured the overall trophy yet again, and no doubt he’ll be back next year to defend it 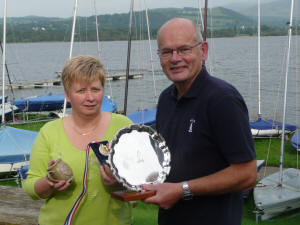 Saturday: Adverse weather strikes again! This time drizzle with little wind – it makes a change for the Tinkers as they have recently suffered from too much wind at this event. How things change! By the time the racing started the drizzle had passed through, the wind picked up slightly, and the afternoon turned out nice for a pleasant sail.

William and Elaine in an RS400 failed to shake off and break away from Mike and Kayla in a FF, on the two long runs, but it was Val and Ken in their GP that took the honours on handicap in the first race

Mike was called back for being over the line in the second race but was soon back in contention, sufficient to ‘stuff Val’ (as he put it) at the windward mark. Robin Dawson sailed well in his laser to take the lead for a couple of legs and went on to win the race just 14 secs ahead of Mike. Val finished 3rd to take overnight lead