Shunty realised there was a bad omen for the day when The Bates wouldn’t start due to a lack of diesel! So it was duly towed to the start line by a Dory which he tied to The Bates. Unfortunately his knot didn’t hold and it drifted off! Having set a course for a NW breeze, just after the sequence began the wind swung to the W so Shunty opted to change the course. He eventually restarted the sequence and the wind, of course, swung back to the NW! C’est la vie!

Although the wind freshened as the morning went on, there were still various lulls. William and Raf took the lead, but the off wind legs were not kind in terms of strength and they were unable to sufficiently break away from the other fleets. As Tim and Ian caught up in their F15 their main halyard broke and they dropped out of the race. Paul Bowmer led the rest of the fleets the wrong way around the course, which helped William increase his lead but not enough to win on handicap. Mike Fairlamb’s win was sufficient to secure the Tinker Trophy.

Perhaps the wind direction would settle for the afternoon, aided by a sea breeze – or was that wishful thinking?! Fortunately the wind did strengthen and held. At last Shunty’s course was more suited to the asymmetrics and William squeezed in a win, only just, by 4 secs a lap!

In the Tinker rally, Malcolm Ellwood was the new overall winner, from long standing winner David Warren, with Stewart and Barbara Warden 3rd. For a pleasant change they had good winds, without being too strong, all weekend. Prizes were presented by vice commodore Stephen Kirkpatrick 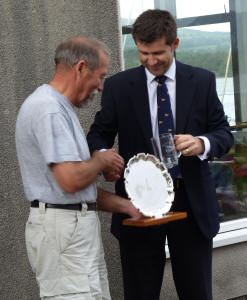 Another glorious afternoon’s sailing, though the wind was not as strong as predicted.

While a fleet of 16 Tinkers are holding their annual rally again, club racing comprised  mixed fleet handicap series for the Tinker Trophy. Though William and Lesley were able to break away, from the rest of the fleet, the lulls in the wind prevented them beating the GPs when handicaps were calculated. While Tim and Mike each won a race, William had to settle for two 3rds. Mike and Eric are overnight leaders.