The weekend started with this year’s Push the Boat Out open day which was well attended by approx 100 visitors, and gave many of them the opportunity to take to the water in the best of the day’s weather.

There were events running throughout the day including mini olympics, hula hooping, and rock painting.

Racing took place in the afternoon. Although the wind backed through the afternoon, the beats were maintained but there were various light areas to test helms.

In the F15s, Mike/Kayla and Neil/Judith each had a 1st and 2nd. Dave/Lynn took two wins from Val/Ken in the GPs. The Handicap fleet had wins for Zefer in a Laser and Scumper in RS100, though Stan in his Solo split the pair in the last race.

Sunday was overcast, showery, some of which were heavy, with a force 4-5 and occasional strong squalls passing through. Crews seemed reluctant to venture out, but 15 boats made it to the start, though some did capsize on their way out. There were several capsizes throughout the day, and combined with the windy conditions, numbers sailing declined as the day went on.

It was good to see three juniors racing, for one race at least. Hannah turtled her Tera soon after the start, but once up again, she battled on to complete the race which was won by Andy/Lily in their Mirror, and leads the series. Mike/Kayla won the 1st race, but Simon/Jon turned out for the afternoon races, and won them both. With three races to count, Mike is the overnight leader.

Dave/Lynn took another couple of wins, but Mike/Ken as their only competition capsizing in the second race, there were no takers in the final race of the day. In the Handicap fleet, Bean/Na won the 1st race in their RS200 but didn’t race after lunch. Scumper and Zefer opted to have a blast in Lasers rather than their RS400. Joe, with a Radial rig, leads the series with a 1st and two 2nds, from Scumper with a 1st, 2nd and 3rd.

The wind eased by Monday morning for the final two races, and fortunately the forecast rain held off. 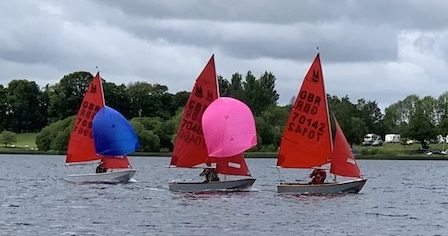 There was a strong fleet of Mirrors and Teras again, and they enjoyed some competitive racing (especially between the Smith brothers) with Bean/Oliver taking the honours. Bean didn’t race the final race which was won by Andy/Lily who won the Orsova Cup.

Dave/Lynn had new competition with Val/Ken who took an early lead but slipped back again so Dave/Lynn secured two more wins and the Commodore’s Prize.

No Flying 15s raced so Mike kept the lead and won the Mellor Mug.

In the Handicap fleet, the final race had three boats OCS but Izzy, who was helming for a change, didn’t return, or get a finish horn. In the freshening wind, Banter had Oscar crewing in place of Izzy, but survived without capsizing, not that the same can be said for Zefer who had a brief capsize on the final lap. Scumper and Zefer were again vying for positions, each winning a race. Zefer had another 2nd, and Scumper a 3rd, winning Zefer the Isel Cup.