What a glorious day – our turn for the sunny bank holiday? The wind is struggling to settle down to the forecast SW direction which should be topped up by a sea breeze in early afternoon. There was a postponement waiting for the wind to steady(?!) and racing got underway by 12:15. Conditions freshened sufficiently for crews to sit on the side at times, and there were some good shifts to take advantage of. At the end of the first beat Robbie D and Big E took the lead and started to break away, but close on their tail were Neil and Judith, William and Elaine, Dave and Lynn in a GP, Paul Wright and James in a F15. The twin winds through the course of the race kept helping to bring the fleet back together and when the results were calculated it was the GPs and F15 that came out best, with Dave Lawson taking first position.

The afternoon race was to be part of the same series but it would take the fleet around the lake. When the line was set it was a northerly breeze, but the sea breeze came in with a vengeance minutes before the start, so the course was quickly changed so that the fleet at least started with a beat! Toggle was in the frame for a collision with a GP at the windward mark after which they both retired. As you would expect, racing in the bay was going well until the lead boat reached Scarness when the infamous shadow of Sale Fell took effect. Robbie D’s lead was rapidly eroded as he sat in the doldrums, but the four RS400s did break away and had some mixed luck on the leg to mark 13. It was Scumper that made it first, having broken away, the winds brought the other three RS400s back on his tail. Scumper held his lead back up the lake, while the others positions chopped and changed. William and Elaine were flattened by a gust and then practised a combination of swimming and diving trying to get the boat back up. At least it enabled him to spot an incident between the two lead GPs, Dave and Mike, in which Mike ended up doing a 720.

The changeable conditions brought the fleets together and overall it was somewhat of a lottery, but Dave Lawson took another first and won the series overall with Mike Fairlamb second

Other notable events included Pat Smith’s first ever sail (can you believe it when having lived with a house full of sailors all these years)! Alan had taken her out in a F15 while Keith Thomas took Carol out in their F15. The conditions were a bit blustery to meet up and share a glass of champagne, but the thought was there!

Over the weekend Sam was the first youth in the Lakeland Laser Grand Prix, 1st U19, and 2nd overall, in the Scottish Laser Grand Prix. Both events held at Annandale SC. While Steve Hunt and Ruth Critchley had travelled to Coniston for the weekend, and finished on a high with a couple of firsts to leave them second overall in the event.

Overall we all had a hard, but successful weekend topped up with a mass of sunshine! 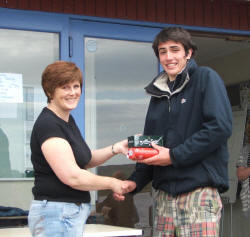 The Spring dinner was held in the club house on Sunday night. Evan Cowen played guitar throughout the evening which started with nibbles and sparkling wine reception, followed by a buffet for nearly 60 people. The social committee, led by Lucy Cowen did a tremendous job including decorating the room and tables, and vice commodore Stephen Kirkpatrick gave a vote of thanks at the end of the evening. 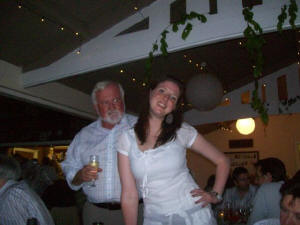 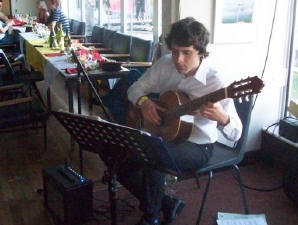 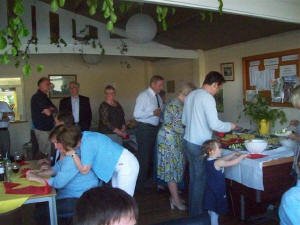 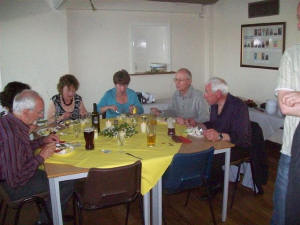 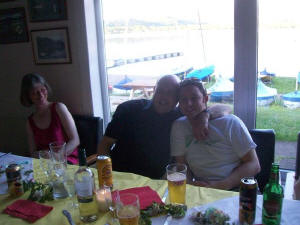 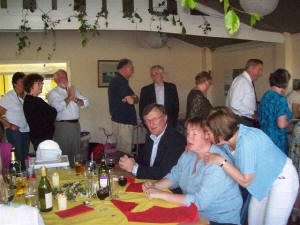 With the boat measurement forms fully completed, Bridget was eager to get back into sailing – or was she? While still just half awake as she wandered across to the clubhouse she passed Ginge who said the boat was all ready to go. A short while later Ginge came looking for Bridget to find out where the caravan keys were, but it’s not locked she said, oh yes it was. Not to worry a spare set in the car 🙂 Ah, but the car keys are in the van 🙁 Let’s get the spare set from home 🙂 Ah but the house keys are in the van 🙁 Ok, let’s phone the boys 🙂 Ah, but the phone’s in the van, and I don’t know their number 🙁 Anyway, Sally’s coat hanger sprang to mind and within an hour Ginge had gained access to the van, his breakfast, car keys, house keys and most of all his sailing gear! 🙂 So all’s going swimmingly 🙂 Then it got the the first beat of the race – when they tacked Bridget had forgotten about the position of the toe straps, missed them and promptly became Bobby – bobbing around waiting for Ginge to practice his man overboard drill. Time for an early lunch. Perhaps they’d get the kite up this afternoon?

As for the sailing, the wind was not as breezy as Saturday, but there were still some excellent gusts to be had. There were many capsizes but overall it was a good race.

Ginge and Bobby ventured out again only to be wound up by the RS400s. First of all it was John Halliday that was reaching across their path as they were beating (both boats on starboard) and it took a while to go their separate ways, but Ginge had to bear away substantially. Getting their breath together for on the beat and William was coming across on starboard so there was a last minute panic tack as Bobby only saw the next incident at the last minute!

The winds had eased from the sharp gusts of the morning, but there were still some good planing conditions at times. There weren’t many capsizes – Pam Bath in her Mirror was one of casualties, and Tony Flinn was a near miss as his spinnaker filled with one gust and the Martin 16 started to fill with water – they did recover, turned on the bilge pump and carried on!

Robbie D and Big E led the asymmetric fleet again and secured two wins during the day. William and Elaine took second in the morning, but the Vareos sailed well and took advantage of the gusts to push him back to 4th. Hugh was 2nd, and Toggle 3rd.

The conditions suited the GPs in the MJM series – Dave and Lynn Lawson winning both races. Mike and Sally took 2nd in the morning race but it was Val and Ken Bell that came 2nd in the afternoon.

No shortage of wind – again! As the Youth squad had their race the water went black and the wind increased as the wind swung to the SW. As the main fleets prepared for their racing the wind eased again, but needless to say came back with a vengeance!! The winds were very gusty, with sudden shifts, and some annoying light patches!

The first race had an excellent reach from A to 2 that had the fleet returning through the start line at great speed. Depending on the gusts at the time the reach into A, and subsequent gybe around it, proved challenging. Mik Chappell couldn’t get out of his death roll so continued until he reached the far shore. Similarly, William and Elaine reached at least 50 m past the mark before having the nerve to gybe – they survived it, but many didn’t. Toddy had seen Mik’s death roll and opted to gybe, but didn’t make it!

The second race took place after what seemed like an eternity of a break, and the course this time was not as exciting though just as challenging. There were more casualties, especially at gybe marks. This time, much to the delight of many watching, William and Elaine were flattened by a gust while beating, and they continued the spectacle by flipping over another couple of times trying to right it. Yes, there was another offering to Neptune but it was spat back out! Mik came up at the end of the race to say how he was going to compliment Elaine on her hair before racing, not that the same was true after it!!! Just goes to show that if you think it you should say it at the time, as later could be too late!

Robbie D and Big E sailed well and took the first race on handicap, but a late capsize in the second race lost them some vital seconds such that they came second to Scumper in his laser.

In the F15 fleet Mike and Sally won both races from Paul Wright and James Springell (It was suggested that his arms are now a little longer!). Sally was well prepared for hanging around between races, even if she didn’t realise it at the time – when she took her drysuit off, the clothes hanger was still inside!

Tomorrow’s another day – due to be sunny, but somewhat less wind

Some people may have caught a glimpse of a rainbow that filled the sky later in the evening, but if you didn’t, there’s a shot above 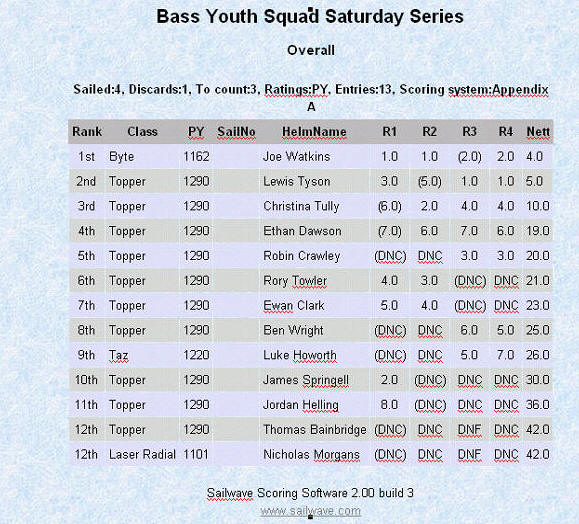