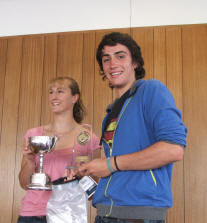 Sam Hall travelled to West Lancs S C on Saturday for the final event in the North West Junior Travellers Series. Due to the gale force conditions the event was cancelled. However, Sam had already gained enough points to win the Travellers Series.He collected his trophy, for the second year running, plus other prizes.