0700: It’s bad enough when you can’t trust the forecast, but when the weather observations (from nearby Keswick) don’t reflect what is actually occurring it gets unbelieveable. The current 2mph SW certainly could not be associated with the overnight history. The Bass micro climate continues to mystify. All the forecasts still suggest it’ll blow boots again today.

How will last evening’s liquid refreshments take their toll today?

0800: The wind is swinging back to the forecast NE direction. Many competitors are up and about having their breakfast, chatting about what they can remember from the night before, and merry in the thought that their in for a pleasant day’s racing….

0900: During the last hour the wind has settled to NNE sort of direction and has been starting to blow. Perhaps the forecast will be correct. Clearly the earlier situation was due to the wind taking in a deep breath, and it’s getting ready to blow out!

1100: What a wonderful day. Good steady breeze, until the squalls come through that is! There’s a lot of apathy at present, and part of the problem is the challenge of launching and recovering the boats with an onshore wind. It seems unlikely that the situation will settle until Murphy’s law kicks in after the racing cancelled flag has been flown!

At least the observations are starting to reflect what is happening here.

With no sign of the wind abating, the OD has cancelled further racing, so the overnight results stand

Commodore Steve Hunt thanked everyone for their help, with a special award to Dave and Lynn Lawson for their hard work launching and retrieving the boats yesterday. Prizes were awarded by Steve’s wife Elaine. Winner of the silver fleet was Mark Somerville and Mike Cowan, with the classic fleet prize going to Keith Thomas and Ian Smith, all from Bass 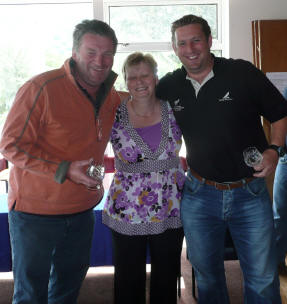 The day has started with a bright and breezy morning, and the forecast suggests this will continue and pick up for Sunday – Perhaps the beefcakes will have the advantage this weekend?!

Highlight of the morning was getting Phil Evans to dig in his pocket and pay for the drinks (teas and coffees that is!)!

There is a total of 23 entries. The onshore winds made launching a challenging, slow process. Neil Platt came ashore for a replacement spinnaker pole but unfortunately he was late for the start forcing him to work his way up the fleet.

Conditions were gusty causing spinnaker legs and gybe marks to be exciting and challenging. Dave and Sally McKee of Dovestone won the first race from Phil Evans and Richard Rigg of Windermere. Best Bass boat being Scott Beattie and John Somerville.

Parts of the second race were interesting when the club handicap course merged with the FF fleet, especially when Commodore Steve Hunt  was rounding the mark which forced one F15 to round wide as Ruth tried to take down the gennaker. There was an unbelievable call (as far Steve’s wife is concerned) when he hailed that he HAD heard a shout of starboard by a F15! Phil Evans took command of the 2nd and 3rd races with two wins. Howard Green with Ian Preston sailed well to secure a 2nd in race 2 with best Bass finisher being Scumper and Toggle in Mik Chappell’s boat (No, not his Mirror!)

The race continued to blow for race three, and there was a general recall to slow up proceedings a little. The desire to give variety in the courses resulted in a need for boats to be fully aware of boats on different legs of the course so that there were no collisions. Gybing from reach to close reach was proving to be a struggle, but it was experience that shone through. This time it was Neil Platt and Alistair Ramsden’s turn to take 2nd place, and Scumper was again best Bass boat, having being in the lead at the start of the 2nd beat.

Green award for the day (but nothing to do with Howard) goes to Janet Lefton of Royal Windermere. After sailing three races with Dave Brockbank, she cycled home to Windermere(?)! Not sure whether she’s cycling back tomorrow.

Will tomorrow’s forecast of stronger winds be correct?

Watch this space for up to date information and results

In club racing, Steve and Ruth pipped William and Ian Macpherson at the post. Dave Lawson tried his hand in Toggle’s Vareo and finished 3rd. Steve, Dave and Hugh Godfrey, all had a bit of capsize practice, though Steve through in an extra one for good measure in front of the clubhouse as he came ashore