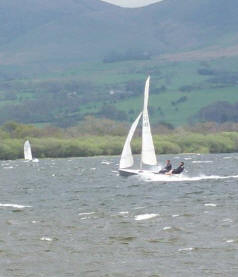 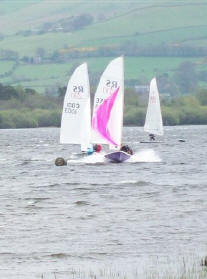 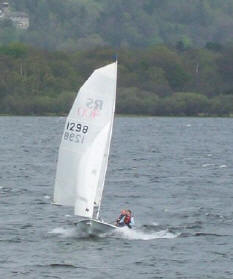 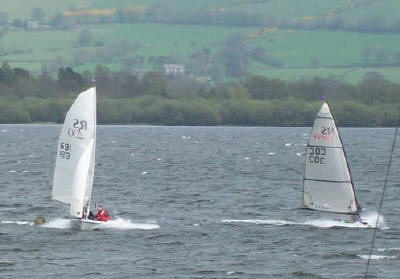 That was the sound in the clubhouse as the fleets rounded the gybe mark outside the clubhouse. There were some near capsizes but they all actually survived the gybe.

The overnight winds had eased a little, though by the time the boats were being launched a squall made getting into the boats and away from the shore somewhat of a challenge.

The Catapults were one boat lighter this morning because of the high winds, but the wind is scheduled to ease in early afternoon. There’s always a chance the forecast could be right! However, just after writing the last bit the wind got up again, white horses everywhere, no gennakers to be seen, and some more hairy gybes.

At one stage T was washed out of the boat and Scumper had to haul him back in (not the first time that’s happened!). Robbie D flew his gennaker on the bottom reach to the leeward mark and took loads of ground off Andy and Toggle, however, the drop was not to be and the suffered their first capsize – another two followed later in the race.

Coming ashore was as hairy as the lunch. Andy capsized on to the jetty. Robbie D took refuge in the reed bed (sshhh don’t tell anyone), Shunty went for a jaunt waiting for a gap at the slip…..

Scumper won on handicap from Andy

Races 2 and 3 were sailed in equally heavy winds – Shunty ran aground with his gennaker up and promptly capsized, then retired. Andy Smith retired following Toggle pulling the jib fairlead out. Robbie D continued his capsize practice, one of which was caught on video – Will they, won’t they?. As you will note the numbers dwindled as the sailors burned themselves (or their boats) out! Scumper being the only SAILOR to finish all three races (The 2nd race he sailed Toggle’s Vareo)

The Catapults were again being led by Roger Hodgkinson, though other places seem to be shared more evenly! Again, the blustery winds caused the occasional capsize!