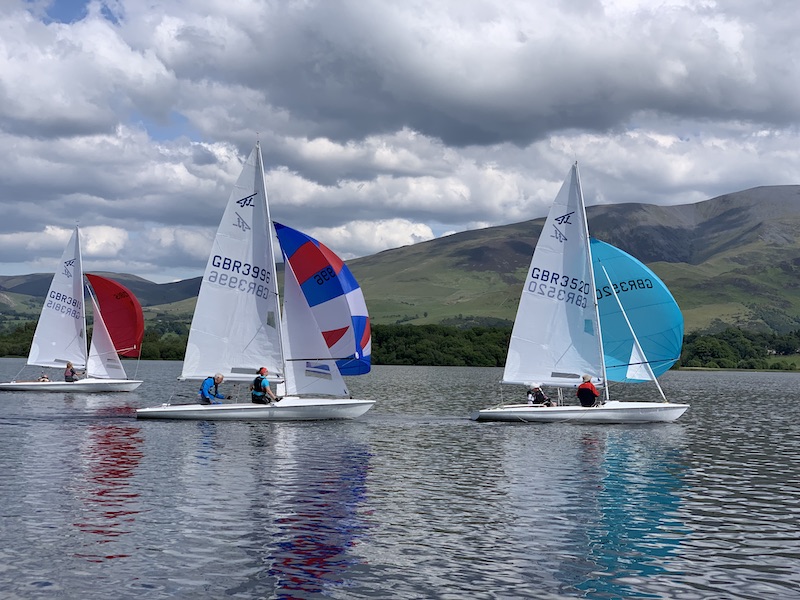 As the nights draw in after the summer solstice, the high pressure left us with clear skies and light variable winds.

The wind did regularly swing from N through to WNW, but the beats remained. Rounding 0 was a challenge as it was partly shaded by the club and shoreline.

Fortunes were mixed at times as a result of the changing wind strengths.

Sunday started with little wind, spinning merrily while members from Keswick reported a good wind down the lake. By the time racing was scheduled to start the wind had filled in and a long beat to 7 was set, with another long run down to 2. The gusts led to some exciting planing conditions, which the F15s thought were a little hairy at times!

Fortuitously, both Neil and Paul were without crews, so they teamed up, taking two 1sts and a 2nd to add to Neil’s two wins from Saturday, to win the Ullock Mug, with Mike/Kayla 2nd and Ian/Lezli-Ann 3rd.

A strong win by AJ/Sue in the GPs in the morning race had him celebrating with a bottle of sparkling wine during the lunch break. Unfortunately it neither boosted his performance, or affected his competition, for the afternoon races, though they were in with a chance of winning the McMillan Cup depending on their result in the final race, Val/Ken took two wins and the trophy.

In the Handicap fleet the wins were spread across several helms with various people only sailing some races. Overall, Banter/Izzy in a RS400 took the honours winning the Grisedale Cup with Rich 2nd, and Ian 3rd, both in Solos.

Four girls in Teras had a good natter as they sailed round on Saturday, and had mixed results between them, but Sunday’s wind proved too much, causing capsizes and retirements. Overall Erin won The Round Table Tankard, with Katia 2nd, and Hannah 3rd.