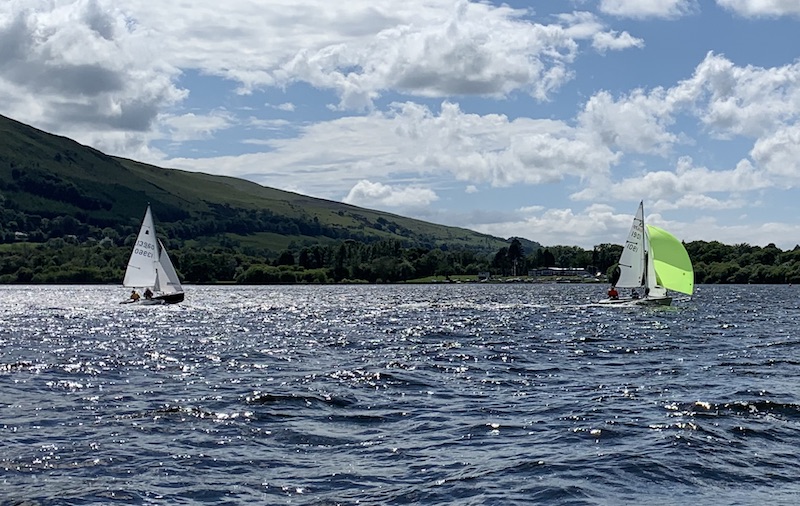 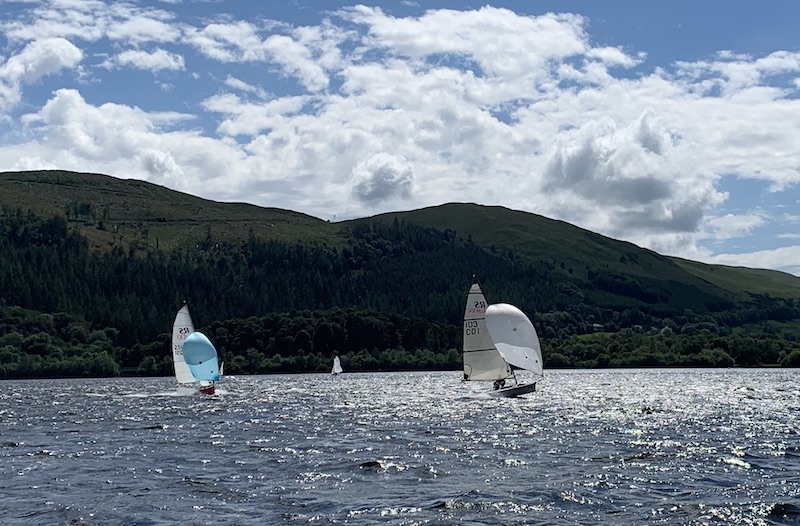 With less than a week until the longest day, it shouldn’t be too surprising that the temperature has improved and the sun is shining. Add a good force 4 from the SW and you have near perfect conditions for Saturday racing.

The fleet was somewhat cautious for the first start with the first boat taking 8 secs to cross the line! The wind freshened as the race progressed, but there were only a couple of capsizes. Fortunes were dependent on which side the the beat was chosen, with the right hand side proving to be more beneficial. On handicap to was to be Ant/Jo in a Vision, on their first outing for a while, that took the honours by just 7 secs from Hugh in a Vareo.

The rain held off, and the wind eased considerably for the next race, and the first four boats finished within 50 secs of each other. This time Val/Ken in their GP took the honours 13 secs ahead of Ant/Jo.

Sunday was unexpectedly different to Saturday, and the forecast. There seemed to be a permanent threat of rain, and although there were occasional spots of rain, that was to be as bad as it would get. The wind was lighter than expected, and as it swung to and fro around Sale Fell, there were occasional calmer patches to contend with.

In the GPs there was an unexpected contender as AJ had planned to race at Windermere but en route Sue realised her sailing gear was still at Bass! Perhaps his early start might explain why Val/Ken slipped away from him?

In the Handicap fleet Toggle in his Solo took the honours just a few secs ahead of Stan, with Angus/Mike in a F15 3rd.

There was some healthy competition in the Slow Handicap fleet with three Teras in contention. However, Andy/Lily in a Mirror, having sailed an extra lap in lighter winds, won on handicap with Katia 2nd followed by Erin and Poppy.

The afternoon race was the Jubilee Sailing Trust Pennant, so the fleet were sent as far as mark 11 in a good southerly, unfortunately the swinging wind continued and Sale Fell caused more calm patches to shake up the positions, and slow down proceedings, as it took 80 mins for the first boat, Angus/Mike to return. On Handicap, Val/Ken were 1st, AJ/Sue 2nd, and Angus 3rd.

Meanwhile the Teras had a race in the bay – Katia led the way, with Erin 2nd, and Poppy a close 3rd.