After a miserably wet Saturday, the clouds parted for some Sunday sunshine, and force 3 from the SW. 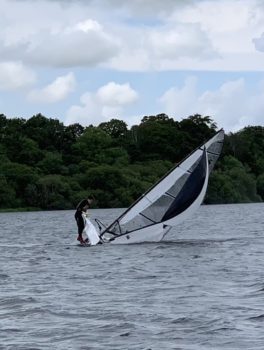 A failure to closely watch the flags had only Paul Gannon on the handicap fleet start line, with other stragglers some minutes behind! There were several capsizes, and a couple of subsequent retirements. On handicap Paul came a close 2nd to Rich Critchley in a Solo. Despite not knowing the course, and almost being misguided by Neil, Rich won the afternoon race as well with Hugh 2nd. Neil had been lying 2nd to Hugh, but rounded mark A incorrectly, trying to call Hugh back. It was only when Tim said he should have rounded it to port that he returned, and then capsized, losing two places in the process! Ethan capsized his RS100 with his kite up which he struggled to release the halyard. When he did eventually right the boat, he was shattered and called it a day.

After being OCS at the GP Scottish championships last weekend, AJ was somewhat more cautious when it came to the GP start being a couple of minutes late! He did get it right after lunch but still finished up with two 3rds behind Mike/Eric and Val/Ken.

Katia was in a Tera, with dad Andy in a Mirror guiding her round the course. Despite capsizing, she recovered her boat, carried on to finish, and earning a well deserved 1st place. In the afternoon she came 2nd to John in a Pico, but she presently leads the series.