Earlier on in the week it seemed that sailing could be blown off by too much wind. Then it changed to too much wind on Saturday, but not enough for Sunday. However, by Saturday, the forecast winds had eased, and although squalls passed through in the morning, there was some good sailing to be had for the sunny afternoon, though there was a small turnout in two fleets.

Scumper took a good lead in the first race, won on handicap with Jim Christie 2nd, and Tim/Ian in a F15 3rd. In the second race Tim/Ian mastered the beats taking a good lead on Scumper, but when the handicaps were worked out Scumper had another win under his belt, 30 secs ahead of Tim.

In the GPs, Dave/Lynn had another two 1sts from Mike/Nigel. 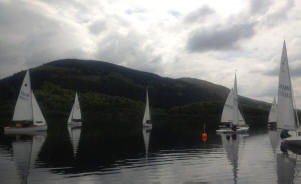 Sunday morning was beautiful, but with very little wind. In fact it was so nice Rachael opted to cycle to the club from Dalston! Fortunately the wind did fill in sufficiently to start racing just a few minutes late, though by the first start there were two different winds on the start line. Roy took advantage of the westerly at the port end and had a great start, although Robin in his Vareo soon took the lead. Scumper may have had a better start if he had rigged his gennaker properly, but he would have probably still been late (perhaps it was due to the wrong type of lager?). After half an hour the wind faded, and various positions changed as the zephyrs came from several directions. The race was shortened a short while later and, of course, the wind filled in. But what would happen for the afternoon pennant race? Would a sea breeze come, and, if so, would it fight the existing wind leaving nothing?!

As it turned out, the wind held from the north, a line and course was set, and while waiting for the fleet to reach the start line the wind died. 3/4 hour later there was still no wind, so racing was abandoned for the day. Hey ho (At least Rachael would not have been too exhausted from the day’s racing for her cycle home).