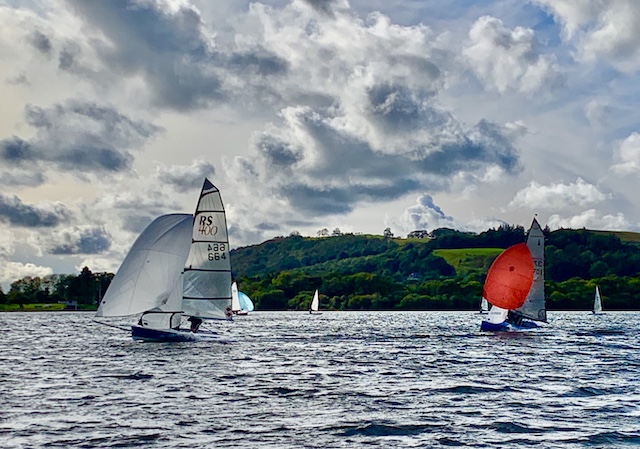 The overnight rain eased through the morning, leaving a dry afternoon for the start of the final weekend series of the club championship season for which more than 20 boats took to the water.

The wind was lighter than forecast, but there was still opportunities for planing conditions on some of the gusts.

The occasional light patch created opportunities for some to make up ground, but, generally, positions remained consistent throughout the afternoon, with Simon/Jon in the F15s, Val/Ken in the GPs, and Andy/Lily in the Slow Handicap each had two wins, and therefore made them overnight leaders for their fleet trophies. In the Handicap fleet, Neil won in his Laser in the first race, and Tony in a Solo in the second one.

Another film video from John, this time 360 version so turn your phone/tablet, or drag the image, to choose your view

The wind and rain was forecast to return on Sunday, but, although it was miserably wet, the wind was similar to Saturday, and eased as the morning went on. The F15 and GP sailors were less than enthusiastic to race, while the Slow Handicap were tied up doing other things, including standing in as OD in Mik’s case, which left a the the Handicap fleet of five boats.

The changing winds strengths throughout the day led to a mix of race positions, with the overall result being dependent on the final race. Banter/Izzy’s win in their RS400 put them half a point ahead of Steve/Ruth in their Merlin to win the Comet Trophy.

Members will note that the lake level has risen considerably over the last week, and with a lot more rain in the pipeline, please consider moving your boat off the foreshore to avoid the risk of damage if flooding occurs yet again.